A prime number has only 2 factors - 1 and itself.  All other numbers with more than 2 factors are called composite numbers.  The number one always tricks people - it is not a prime number because it only has one factor (1).

Using the Number Square, find all the prime numbers between 1 and 100.  What techniques did you use to help you investigate?  Which numbers do you know cannot be prime?

Further Reasoning - if you're up for the challenge!

Yesterday you started reading One chance. Now let’s find out how close your predictions were. Read on!

Sarah gasped. This is just what she was looking for – another chance. Maybe lose the idle husband as well, she thought, shaking her head.

“I am going to give this a go. I am thinking lots of money to buy expensive clothes and maybe you can finally sort this house out,” she said to Jack, rummaging desperately in the drawer for a coin.

“Utter nonsense,” muttered Jack, glancing up from his book and taking in the room. “I love this old house and you just the way you are. Even if all that did come true, there’ll be a catch. No one gets something for nothing. Just throw it away.”

Sarah stopped and nodded sullenly. He was right. She made to throw the ticket on the fire, but something stopped her. Furtively, she stashed it in her pocket.

Later that evening, as Jack slept, Sarah retrieved the ticket and greedily scratched ‘Wish 2’, dreaming of immense riches or, to be precise, £100,000. Outside, a squally wind howled. Inside, nothing happened. Bitterly, she tossed the ticket into the bin.

The next day, the wind died down to a cool, whispering breeze. Jack prepared for his early morning walk with Hope. Pulling his woollen hat firmly down over his ears, he called out to Sarah that he wouldn’t be out long and left. Sarah scowled. She could barely respond.

Eight hours passed and Sarah began to worry – where were Jack and Hope? Shaking with fear, she dialled 999, hoping for the best but fearing the worst.

A massive search was launched but there was no sign. Jack and Hope had simply vanished. Sarah was distraught. Deep down she worried if their disappearance had anything to do the golden ticket.

Days later, as the wind whipped up again, a woman in a black cloak knocked at the door. She told Sarah she had been sent to offer some compensation for her sad loss. Sarah was feeling desperate so asked, “How much?” “Shall we say… £100,000?”

Shocked, Sarah recalled the greedy sum she had wished for. Could it be true? Had her selfish wish actually been granted? Quickly, she raced outside and rummaged desperately through the bin, trying to locate the discarded ticket. With sickening dread, she smoothed out the crumpled ticket and gasped in horror. It was true. The second wish had been redeemed.

Sarah leaned against the bin for support, her head spinning, her thoughts in turmoil. Then she gathered herself together. There was still one final wish left … Could she use it to try and bring Jack and Hope back? She needed a coin, quick. Just then, without warning, the squally wind howled and snatched the ticket from her hand. It spiralled, higher and higher like autumn leaves in a storm and then, like the mysterious woman herself, it was gone. Sarah cried out of helpless pain. Inside, the shabby curtains were drawn and a humble fire crackled.

Task: I have underlined and highlighted some words in bold. See if you can work out what they mean using the context of the story. 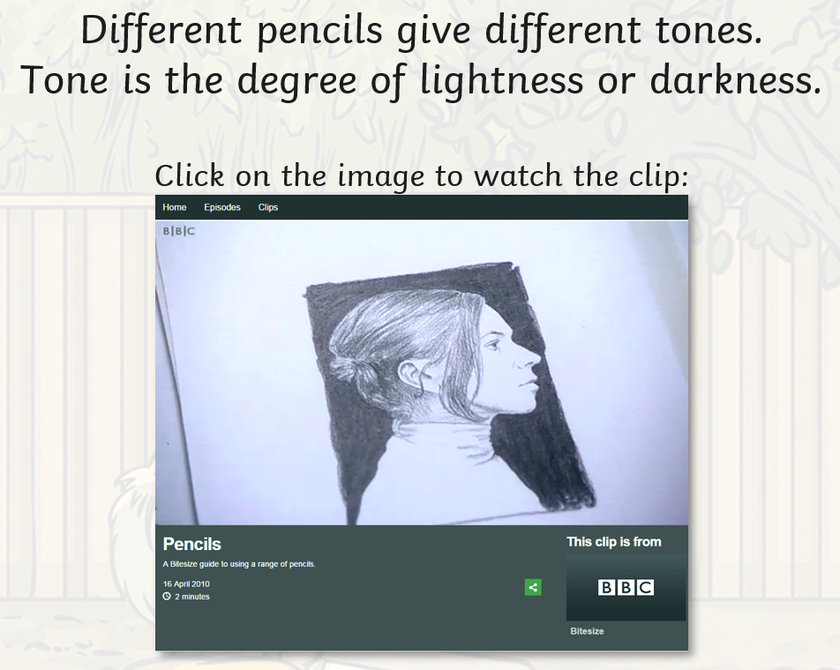 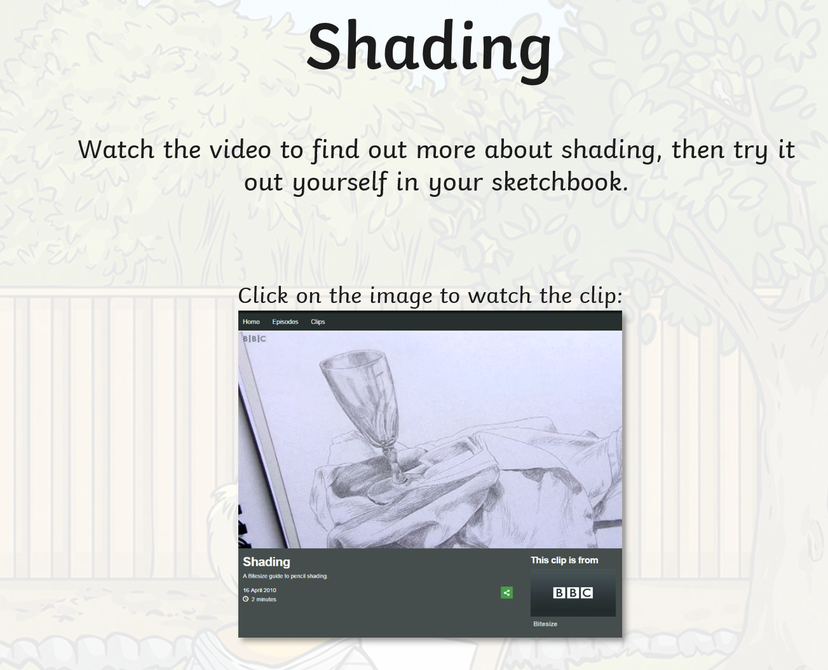 Look around your room, garden or house. Find a small collection of everyday items. Some can be man-made, such as a book, a fork or a phone. Some could be natural objects, such as a piece of fruit, a leaf or a piece of wood. Try using a range of the sketching techniques from the pictures and videos above. DON'T worry about getting everything perfect, it is about learning by trying!

Don't forget to email us in your sketches!